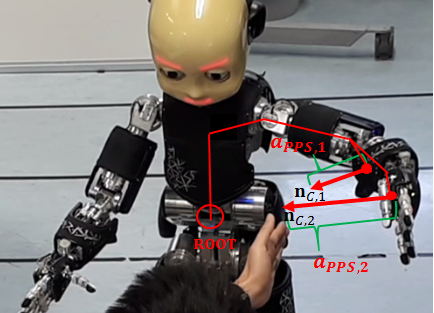 We have developed a new framework for safe interaction of a robot with a human composed of the following main components (cf. Fig 1):

Here’s another video of the controller in action:

Controller in action. The controller can seamlessly process both tactile (physical contact) and visual (prior-to-contact) information in order to avoid obstacles while still optimizing its trajectory to accomplish the primary reaching task.

The main novelty lies in the formation of the protective safety margin around the robot’s body parts—in a distributed fashion and adhering closely to the robot structure—and its use in a reaching controller that dynamically incorporates threats in its peripersonal space into the task. The framework is tested in real experiments that reveal the effectiveness of this approach in protecting both human and robot against collisions during the interaction. Our solution is compact, self-contained (on-board stereo cameras in the robot’s head being the only sensor), and flexible, as different modulations of the defensive peripersonal space are possible—here we demonstrate stronger avoidance of the human head compared to rest of the body.

Alessandro has more than thirteen years' research experience in robotics. He worked full time with the iCub, one of the most advanced humanoid robots, on machine perception and artificial intelligence. His mastery of C++ and the YARP/ROS software architectures has been employed for research in human-robot interaction, kinematics, tactile perception and robot control.