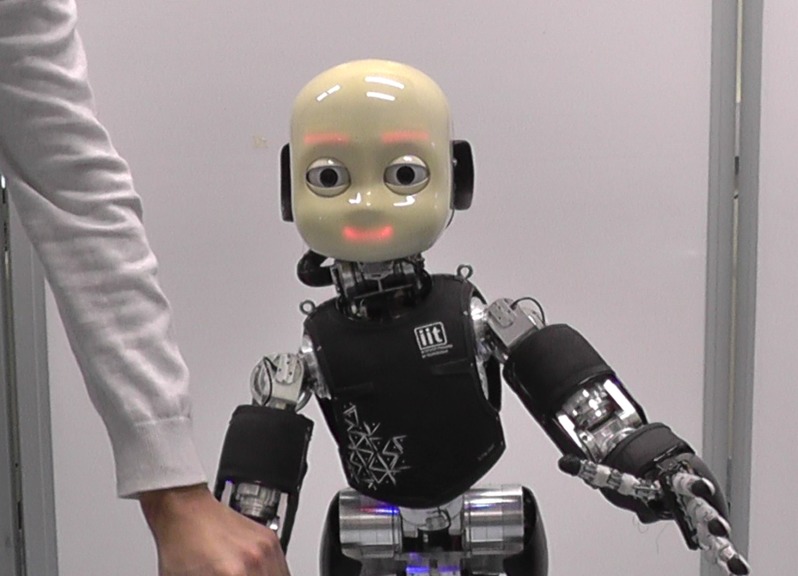 We have developed a framework for gaze stabilization on the iCub robot. The system uses all 6 degrees of freedom (DoF) of the head and it relies on two sources of information: (1) the inertial information read from the gyroscope mounted in the robot’s head (feedback) and (2) an equivalent signal computed from the commands issued to the motors of the torso (feedforward). For both cues we compute the resulting perturbation of the fixation point and use the Jacobian of the iCub stereo system to compute the motor command that compensates the perturbation (see Figure 1). Retinal slip (i.e. optical flow) is used to measure the performance of the system.

Figure 1. Block diagram of the framework proposed for the gaze stabilization. The Gaze Stabilizer module (in green) is designed to operate both in presence of a kinematic feedforward (kFF) and an inertial feedback (iFB). In both cases, it estimates the motion of the fixation point and controls the head joints in order to compensate for that motion.

As result, the Gaze Stabilizer is realized by the cascade of two main blocks: the first block is used for estimating the 6D motion of the fixation point by means of the forward kinematics, while the latter exploits the inverse kinematics of the neck-eye plant in order to compute a suitable set of desired joint velocities able to compensate for that motion. The forward kinematics block represents a scenario-dependent component, meaning that its implementation varies according to the type of input signal (i.e. feed-forward or feedback). Conversely, the inverse kinematics module has a unique realization.

Figure 2. Kinematics of the iCub’s torso and head. The upper body of the iCub is composed of a 3 DoF torso, a 3 DoF neck and a 3 DoF binocular system, for a total of 9 DoF. Each of these joints, depicted in red, are responsible for the motion of the fixation point. The Inertial Measurement Unit (IMU) is the green rectangle placed in the head; its motion is not affected by the eyes.

To validate our work we set up two experiments:

For each experiment, two different sessions have been conducted: in the first session the robot stabilizes the gaze only with the eyes, while in the second session it uses both the neck and the eyes. In both the scenarios, a session without compensation has been performed and used as a baseline for comparison. It is worth noticing that Experiment A is obviously a more controlled scenario, and for this reason we have used it to obtain a quantitative analysis. In Experiment B instead the disturbances are generated manually, and, as such, it is provided only a qualitative assessment of the performance of the iFB modality. For validation we use the dense optical flow measured from the cameras (cf. Figure 3). This can be used as an external, unbiased measure because it is not used in the stabilization loop.

We demonstrate a significant improvement of the stabilization with respect to the baseline (68.1% on average). As expected, the system performs better in the kFF condition than in the the iFB case (23.1% on average): this is because in the former case the system uses a feedforward command that anticipates and better compensates for the disturbances at the fixation point. Furthermore, by exploiting all 6 DoFs in the head, the performance of the system improves by 24.4% on average. We show that the feedforward component allows for better compensation of the robot’s own movements and, if properly integrated with inertial cues, may contribute to improve performance in presence of external perturbations. We also show that the DoF of the neck must be integrated in the control loop to achieve good stabilization performance.