Development of body representations in humans and robots 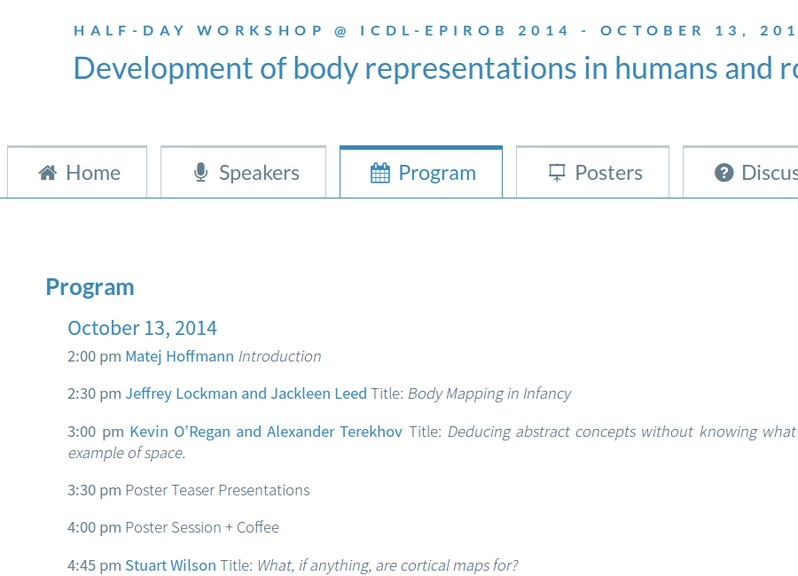 Submission: 2014 Joint IEEE International Conference on Development and Learning and on Epigenetic Robotics

The goal of the workshop was to explore the possibility of robots developing models inspired by the mechanisms of human body representations. In this way, they can on one hand become new modeling tools for empirical sciences – expanding the domain of computational modeling by anchoring it to the physical environment and a physical body. Consequently, complete sensorimotor loops can be instantiated and not only algorithms but whole behaviors validated. On the other hand, robot controllers endowed with multimodal whole-body awareness and plasticity typical of humans should give rise to – in robotics unprecedented – autonomy, robustness, and resilience.

In order to achieve a variety of goals, humans and animals seamlessly command their highly complex bodies in space and concurrently integrate multimodal sensory information. To support these capabilities, it seems that knowledge or representation of the body and the surrounding space is necessary. In this regard, a number of concepts like body schema and body image were proposed. However, a growing number of studies from psychology and the neurosciences suggests that body schema or image are in fact mere umbrella terms, encompassing a multitude of different body representations that may be partially overlapping, partially dissociable, and partially organized in a hierarchy. Yet, empirical knowledge regarding the workings of these representations of our bodies in the brain is fragmented and sometimes contradictory and a coherent understanding of the key mechanisms is missing. Furthermore, computational models are scarce and address at the most isolated subsystems. Humanoid robots possess morphologies – physical characteristics as well as sensory and motor apparatus – that are in some respects akin to human bodies. However, their body representations, so-called plant models, have largely opposite properties to those that we suspect in humans – robot models are typically centralized, fixed, explicit, and amodal.

This workshop capitalized on the ICDL-Epirob focus that lies at the intersection of scientific and engineering disciplines that are concerned with development, but provide a more specific theme, namely body representations and their development. The workshop was be divided into two main sessions. In the first, the invited speakers (already confirmed) provided their perspectives on the topic and set the stage for a discussion. The speakers were carefully chosen, such that they cover all the disciplines that are at the core of the topic: developmental psychology (Jeffrey Lockman, Kevin O’Regan), computational neuroscience (Stuart Wilson), and cognitive developmental robotics (Minoru Asada). All of the speakers are specifically concerned with body representations in their current research. A second block consisted of short presentations / flash talks and a poster session. This was open to the community at large – we advertised the workshop in appropriate channels and solicit 1-page abstracts, which can report on recent or ongoing work, or even future work and ideas. These were reviewed by at least one expert from the empirical sciences and one from a synthetic discipline). The abstracts were made accessible on the workshop website.

The target audience overlaps with that of ICDL-Epirob itself. We want to primarily attract researchers from developmental psychology, computational and cognitive neuroscience, machine learning, and cognitive and developmental robotics – united by the theme of body representations and their development.

I implemented a website based on codrops template designs. It is fully responsive, extensible and carefully crafted. The main idea behind it was to convey a sense of order and rational distribution of the content, while at the same time providing a consistent experience among the various design elements.