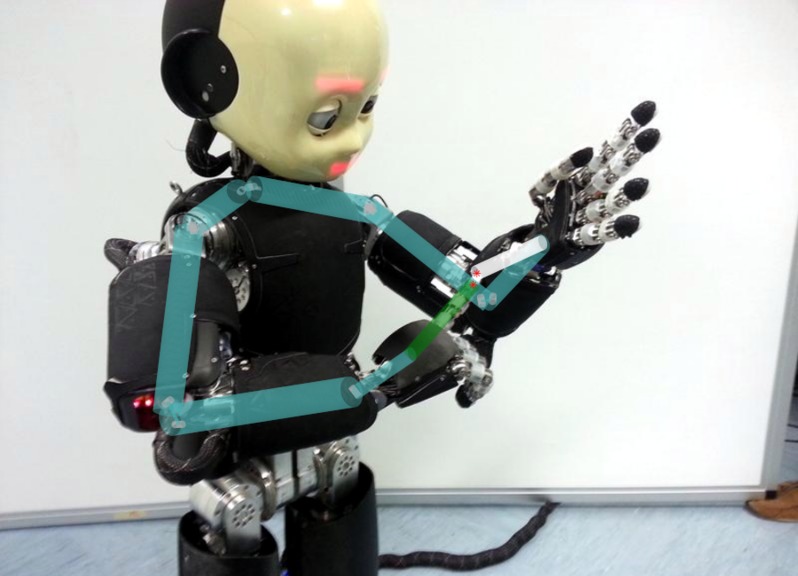 This project deals with the task of solving the problem of self-(or double-)touch. It is defined as the robot being able to touch itself on a specific region of the skin, and it represents an unprecedented opportunity for a humanoid robot to achieve the simultaneous activation of multiple skin parts (in the video above, patches belonging to the right hand and the left forearm). This high amount of information is then used for a completely autonomous calibration of the body model (i.e. kinematic calibration or tactile calibration).

The self-touch or double-touch scenario has been further exploited for collecting tactile and proprioceptive data that serve kinematic calibration. In robotics, this constitutes a novel solution to the problem, in that no external metrology (like cameras or other tracking apparatus) is necessary. The kinematic chain is closed through touching its own body: the correspondence between the predicted contact point from existing forward kinematics and the actual position on the robot’s “skin” provides sample data that allows simultaneous learning of the kinematic representation as well as the position of individual tactile sensors (taxels). The existing iCub kinematic model (DH parameters) and initial calibration of the tactile array serves as a starting point and we have successfully improved on these. The data collection procedure is automated - self-touch is autonomously executed by the robot - and can be repeated at any time, providing a compact self-calibration system.

At present, the visual modality is being added, employing modules that already exist for the iCub (object tracking, gaze controller, stereo vision). This will allow for automatic calibration of additional components of the system: head and eye kinematics, the stereo pair, and camera projective maps. Furthermore, in collaboration with Bielefeld University, we are improving the autonomy and robustness of the double-touch behavior by using visual and tactile servoing.

Here are the slides I used during the presentation at ICRA2014:

Calibration continues to receive significant attention in robotics because of its key impact on performance and cost associated with the operation of complex robots. Calibration of kinematic parameters is typically the first mandatory step. To this end, a variety of metrology systems and corresponding algorithms have been described in the literature relying on measurements of the pose of the end-effector using a camera or laser tracking system, or, exploiting constraints arising from contacts of the end-effector with the environment. In this work, we take inspiration from the behavior of infants and certain animals, who are believed to use self-stimulation or self-touch to “calibrate” their body representations, and present a new solution to this problem by letting the robot close the kinematic chain by touching its own body. The robot considered in this paper is sensorized with tactile arrays for a total of about 4200 sensing points. The correspondence between the predicted contact point from existing forward kinematics and the actual position on the robot’s ‘skin’ provides sample data that allows refining the kinematic representation (DH parameters). The data collection procedure is automated — self-touch is autonomously executed by the robot — and can be repeated at any time, providing a compact self-calibration system that does not require an external measurement apparatus.