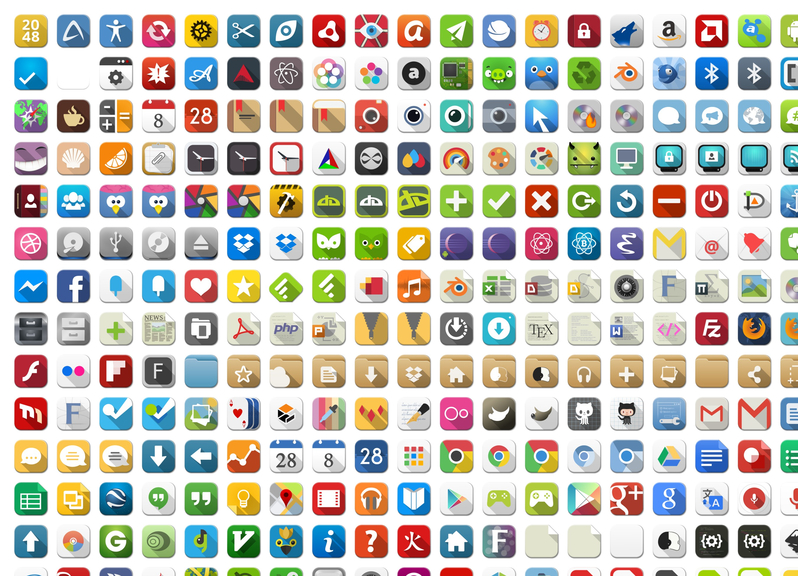 The FlatWoken project is released under the CC BY-SA 4.0 License. It is is meant to be a complete set of icon themes for Linux AND Android. If you’d like to use and/or modify these icons for your own purposes, please consider the fact that the iconset is free to use as long as its use is not conveying any monetary income; if it does, we can arrange easily for a fair compensation. Regardless of the use, I’d like to know if and how my icons are used, and I’d like to receive some sort of credit for it! Nothing crazy, though: just a quick note on the bottom or your website with my email/website is sufficient :)

For any icon request and/or bug, please use github.

FlatWoken project is derived from the popular AwOken icon theme. It’s freely inspired by its minimalist approach, even though it is basically a revision with an eye toward flat design.

The same guidelines are present inside the image called icon-template.svg , but they’re reported here for the sake of completeness:

How to create a compatible long shadow (Inkscape only)

Let’s suppose we have already created an icon whose design matches the guidelines. The last step is to create the long shadow. Unfortunately, on Inkscape this is not straightforward w.r.t. other software such as Adobe Illustrator (for which there are plenty of tutorials out there). In the repo there’s an icon called icon-template-longshadow-tutorial.svg that is supposed to provide a step-by-step tutorial for the long-shadow. It’s divided into several images, each of them is explained here (from top to bottom):

Guidelines for the Long Shadows (R-G-B-A)

Firstly, a git installation should be up and running on your machine (and you should have at least some basic knowledge related to git). Secondly, remember that this method doesn’t work for KDE (but it works for any GNOME/XFCE/LXDE installation) Then, follow these simple steps:

FlatWoken project is at its early stages. A lot of icons are yet to be designed, and the project is open to external contributors as well as independent single submissions! I’m also open to icon requests.

Github is a great platform for collaboration. Therefore, the best way for me to handle external submissions (as well as for you :P ) is to use github’s tools! So please remember to use them as much as you can. In the following: three typical ways to contribute to the project are highlighted.

Ask for an icon

If you think that a very important icon is missing, simply open an issue with the icon name and the request will be managed as soon as possible. An .svg file with the original icon would be of great help (and it would definitely speed up the process of designing the icon requested). To ease the submission, you can ask for an icon by filling up this form-> http://goo.gl/NxXii0

Submit an icon / a bunch of icons

If you’re a designer on your own you can directly create your own icon, and ask for a submission on the official repo. The best way to do that is to fork the project, do your own icons and once you finish one or a bunch of them, ask for a pull request. I will review them and if everything is ok I’ll add them to the main repo. Remember that I am a pixel-perfect maniac, so please carefully follow the Icon Guidelines chapter before asking for a pull request. You will save both mine and your time :)

If you’re skilled enough and you’re into the project so much that I don’t even need to validate your icons before submitting them, I will be pleased to directly add you as a contributor of the main project!

Alessandro has more than thirteen years' research experience in robotics. He worked full time with the iCub, one of the most advanced humanoid robots, on machine perception and artificial intelligence. His mastery of C++ and the YARP/ROS software architectures has been employed for research in human-robot interaction, kinematics, tactile perception and robot control.